The moment most travelers fear: I am lost, in a foreign country, at 11 o’clock at night, and Google Maps can’t even help me since I don’t know the address of my residence hall; I just moved in an hour ago. Being lost is not without its upsides though, so I continue to wander around translating graffiti with my phone, assuming that eventually a solution will reveal itself, or I’ll happen to walk by my residence hall by accident.

Why is this happening? Well, I’m studying abroad in Athens, Greece this semester, something I’ve been planning for almost two years. In 2017, I visited my brother studying abroad in Cyprus and actually thought I was going to Greece, until I got there and learned they are separate countries. At first glance, though, it would be hard to tell the difference between the two.

Both have 80-degree days well into November, sunshine for 90% of the year, stray cats and dogs abound and dusty ancient buildings, sometimes crumbling and sometimes intact, but always covered in graffiti, on narrow winding streets with cars racing up and down with no regard for the lives of pedestrians whatsoever.

I fell in love with Cyprus and the idea of studying abroad almost immediately and knew that no matter what, I was going to study abroad wherever I could when my junior year rolled around. The fact that I’m a theater major and that the American College of Greece has an impressive drama program was pure coincidence, so I ended up here in Athens for the fall.

Around midnight I find my way back by looking at the Snapchat map and seeing a lot of activity in one area in a suburb, knowing it couldn’t be anything else but all the other Americans moving in today. See? I knew there was no reason to panic.

The semester starts on Thursday, which is when I have four out of my five classes; I deliberately created a schedule that allows me time to travel outside of Athens from Thursday night to Monday afternoon. Shockingly enough, the most interesting class today is Public Speaking, which I suppose makes sense given that the professor is an expert in making long speeches about boring topics (like the syllabus) that are still engaging to listen to. Studying abroad gives new exciting options for learning, and my other classes this semester are Performance as a Social and Political Act, Body Awareness and Movement, Modern Greek 1 and Intro to Philosophy.

On my way home from campus, I load up at the grocery store and have to pay for a shopping bag because at many European stores, you must bring your own bags to help conserve waste, which is great for the environment but bad for those of us who never remember to bring their reusable bags anywhere. I’ve almost made it back to my residence hall when I spot a stray cat lying in front of a fenced-in house and notice immediately that it doesn’t have a tail; some awful person cut it off, and recently, by the looks of it. The little white-and-orange kitty looks sick and miserable, with some teeth missing, and I don’t know what to do.

I take out my phone and use some of my precious data to find that there’s a veterinary hospital a few blocks away, but I still have no means of transporting her. Can I even afford to take her to a vet? Does the impressive Greek healthcare system extend to cats as well? And what would I do with her once they fixed her up anyway? We aren’t allowed to have pets here, I would just have to release her back to the street.

I wait with her for several minutes weighing my options and researching veterinary costs, then run home to get a basket to carry her in, only to return and find her gone. I pray that the family in the house behind her took her to the hospital. Sometimes it’s hard to be a bleeding-heart cat-lover.

For the first few days, some American students had been discussing how different our neighborhood (Agia Paraskevi) is from the romantic white houses with blue roofs and ancient architecture brimming with history that we all picture in our minds when we think of Greece; it’s like expecting the Hamptons and ending up in Queens, and they were a little disappointed. But touring downtown Athens surpassed all expectations I could have had, and suddenly it’s okay that we aren’t living on the set of “Mamma Mia!”

Our tour group meanders past rows of neoclassical buildings now inhabited by restaurants, shops and gelaterias, on sandstone pedestrian streets interspersed with ancient sites, like Hadrian’s Library and the Roman Forum, that you can walk through sipping on iced coffee that costs only one euro.

Athens doesn’t allow buildings taller than a certain height, because the Greek citizens want to be able to see the Acropolis, and sure enough, it can be viewed from wherever we are, a stoic reminder of the city’s ancient roots. A man with a handful of bracelets waits outside Hadrian’s Library and tries to trick gullible tourists into putting one on so they have to pay for it; there are a lot of scams like this to watch out for in popular European cities. The walk is short, though, because now it’s time for lunch.

Meals in Greece are not a quick affair. We sit at long tables as waiters bring out plate after plate of pre-meal courses for us to enjoy as a group, with enough time in between to eat plenty of each and really savor it; whole wheat bread, Greek salad, oregano fries with tzatziki sauce, deconstructed gyros and Greek yogurt with honey (although I guess they just call it yogurt here).

Something to note is that Greek salad, when you actually get it in Greece, does not come with lettuce, instead it is primarily fresh tomatoes, tossed with cucumbers, olives and red peppers, with a brick of feta cheese on top and an olive oil mixture in the bottom of the bowl. I never liked tomatoes before but, after three days here, I’ve changed my mind completely.

The gyros are a similar experience — made from unidentifiable meat, raw onions and tomatoes — all of which I have historically despised. But, all together with tzatziki sauce and whatever spices they marinated the mystery meat in, I can’t get enough of it. My new friend Angela and I were desperately hoping to get gelato for dessert, but the yogurt and honey is the perfect simple and sweet conclusion to this meal of hearty, unpretentious Mediterranean cuisine.

Something I didn’t expect is that most of the American students here came with their friends or a group from their school; I didn’t bother trying to convince any friends to come with me, and no one else from Rowan chose Athens to study abroad this year, so I am one of the few who is utterly alone. Not to fear, though, I’m an experienced solo traveler, and this way I have the opportunity to make new friends. I’m fortunate enough to have fun suitemates to hang out with, but I still value my alone time when traveling and I spend hours a day wandering the streets of Agia Paraskevi windowshopping, taking photos of graffiti, and spelunking all the mysterious abandoned buildings.

“Why are you so white in Greece?” asks the man helping me at the hardware store, gesturing up and down at me, surely echoing the thoughts of everyone I pass by here. I tell him I’m studying at the college here for a semester, but not that I’m from the United States; given the reputation of American tourists in Europe, I like to let everyone assume I’m from Germany or Denmark instead.

There are a lot of things that make Athens so spectacular, but I think the most incredible is just how ancient it is; after all, it is one of the oldest continually inhabited cities in the world. At night we go out to a rooftop restaurant in downtown Athens, with a stunning nighttime view of the Parthenon from no more than 400 meters away, and I consider how much of human history that structure has seen; Greek empires rose and fell, humans developed philosophy, theater, geometry and modern medicine here, all while the Parthenon rested quietly atop its hill for centuries. I imagine Plato and Socrates once walked these same streets and gazed up at the Parthenon in its full glory, Alexander the Great may have paid tribute to Athena there before heading off to conquer another civilization, and now, I sit on a rooftop eating a salad and trying out my terrible Greek language skills on a waiter, and the Parthenon need not know that any time passed at all. 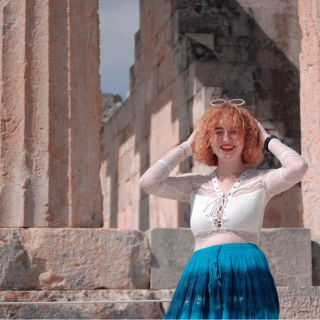